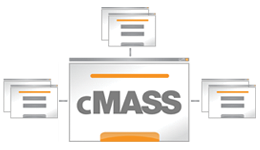 Nobody should start to undertake a large project. You start with a small trivial project, and you should never expect it to get large. If you do, you'll just overdesign and generally think it is more important than it likely is at that stage. Or worse, you might be scared away by the sheer size of the work you envision. So start small, and think about the details. Don't think about some big picture and fancy design. If it doesn't solve some fairly immediate need, it's almost certainly over-designed. And don't expect people to jump in and help you. That's not how these things work. You need to get something half-way useful first, and then others will say 'hey, that almost works for me,' and they'll get involved in the project. -- Linus Torvalds

cMASS is a PHP Framework/CMS developed by MASSVision for their own purposes. Although it was at first designed as a CMS, it has served as basis for many different web applications thanks to its high degree of modularity. We have developed over 40 standard modules, such as e-commerce, news, gallery, banner system, blog, comments, messenger, etc.

Ever since we released its first version in 2003, we have created over a hundred cMASS-based web sites and applications. cMASS was designed as a (pull-based) MVC framework long before it became a buzzword. It uses its own ORM (with an interface to the MySQL database) and templating engine.

cMASS architecture allows hosting of multiple sites/applications sharing the same core on a single server, making it easier to perform site maintenance and improve its performance, as well as to add new features and implement new technologies that are readily available on all cMASS-based sites that we host.

cMASS is continuously under active development and maintenance. The current version is v5.2.60.